So the saga with the egg thief-food tipper continues…we find out it makes at least one poor decision.

Here is June 11, a sunny, warm day, eggs collected around 6:45 p.m.  Lacy has started to lay eggs in the back barrel again…and though I haven’t mentioned it on the little writer board thingy because I hadn’t done Coop Close-up yet, I didn’t see Frosty Flakes that night… uh-oh. I think this is the second Toes on Perch she has missed.  Not looking good.  Flock size probably down to 14 now.

And here is June 12. Again, no Frosty Flakes… sad face. It was sonny, and in my opinion, tooooo hot.  You know that racoon?  Yah, we saw it again overnight, a few hours after I went to bed, my alarm went off (one was set wrong, supposed to go off late in the morning, but it went off just before midnight-woke me up, and I schlepped downstairs thinking I was reaalllly tired even though I thought I got to bed just barely on time… and then realized I was a derp and HOORAY I could go back to sleep for another 6 hours… and the dogs wanted to go outside (to be continued).

And so about 11:09 p.m. the dogs had been outside for a minute or so, and then as I was taking a chance to wee (inside, so I never saw how this started), I heard a serious amount of commotion outside.  A lot of things happened in a short amount of time, I ended up outside screaming at the dogs to stop, leave it, and simultaneously freaking out internally because that raccoon had been stupid enough to be INSIDE the fence… and had been cornered up in the corner by shed and coop… where Kyle was attempting to kill it, Ralf wanted to … inspect it?  Bite it?  Bark like crazy at it…. who knows.  The full story and a bit of a tangent can be found on the update from June 15, but long story short, there was a fight with the coon, the coon disappeared after I got the dogs inside and did some minor first aid to Kyle (no major injuries, both dogs are vaccinated). I didn’t get as much sleep that night as I hoped and was rather jangly the next day at work trying to use my breaks to find a vet in the area open when I wasn’t at work to give the dogs their booster vaccine (just to make sure)… but eventually all things were sorted out.

And for June 14, there’s just 1 picture, taken the next morning.  I managed to find a vet which was open in the evening, so basically after I clocked out at work, I headed home, grabbed the eggs to make sure the coon couldn’t grab a meal from them at least, got the dogs in the car with their leashes, and headed to the vet.  So here’s the eggs. 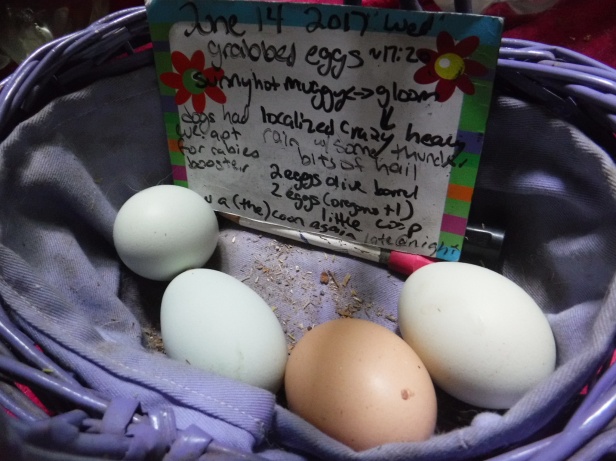 And as I mention on the little wipe board, it was generally sunny and hot until about the last 4 minutes of the drive to the vet… where upon the heavens gushed down, I missed the last turn due to the rain, had to find a place to turn around… and it actually hailed a bit.  Kyle did great at the vet, both dogs look fine and are boostered, and Kyle has a short course of antibiotics just in case.  And of course… I saw the coon again the previous night, outside the yard… Kyle and I stared at him up near the old camper, staring back at us from about 5 feet up a tree trunk debating if it should climb higher, scarper off, or wait until we left for it to go check for yummies.  Eventually enough flash lights to the eyeballs made it decide to leave.

Here is June 15.  Since I had the day off, I checked for eggs a few times, and snagged them when I could, again, fewer yummies around for the coon… with any luck.   That’s Blondie in the olive barrel, and Lacy was on the old burn barrel but I didn’t have the camera then.  When I tried checking under Blondie early in the day (just after the picture) she freaked out when I put my shoulders and head into the barrel, and tried to exit past me, and there was no egg yet… So I just backed out and left her to do her thing when she was read again.  Sadly, something got to some of the eggs before I could at some point, but I’m thinking that I must have come back from my jog with Kyle or gotten back nearer the yard with the mower or something because I don’t think it got to enjoy the snack.  Little bugger.

Well, that’s the Egg-A-Day updated!  For more details on the coon encounter, see the other update from June 15.