As mentioned in the Egg-A-Day we are still battling the coon.  Sigh.  I’ve tried the wrist rocket on it, and I think this will be a continued effort.  I don’t want to be shooting anything more powerful at it for a few reasons… including I’d be shooting up the yard… um. Towards the road.  And towards the parked cars, and the RV.  So, yah, that’s a no. But a wrist rocket is a nice compromise… a bit of a sting and a bruise to the bum, but no dead bodies up over the hill when I miss and the bullet just goes off into the sunset, or takes out an ambulance driver on the way to the emergency at the old folks home down the road.  Wish me luck (on stinging the coon’s tush… without damaging any ambulances or dead bodies etc.).

So, on my jog with Kyle, we saw (sadly, after I took the pictures I went to urge it out of the street I found it was a bit late for that…) a juvenile Black Rat Snake (as I’ve mentioned before there’s a bit of a mess of the names here… some call it the Black Snake, others the Rat Snake… and blah blah, as well as the scientific names may be being updated, but that’s what it is).  And later in the evening, early night even you might say, I happened to be heading upstairs and my peripheral vision caught a match for one of those shapes that throws up a flag in the brain if anything comes close to matching it… this being the circle with eight lines extended from it…And I thought I’d just take a picture to say I LOVE MY SCREEN.  No, I didn’t flick it off.  So once I was done taking the pictures, I headed down stairs to put the camera back where it usually lives, and on the way back up, I looked to see if my friend was still there… and yeppers, still there.  Plus, it had a 1/4 sized friend parked on the lower left corner of the outside of the screen… smashing! Great place for them…. outside!

I also have to let ya know there will be a separate update specifically about a kitten in a tree along my jog route…There’s some videos (8 minutes for one at least… didn’t check the others but they’re not short). They’re there if you are super interested in them, but I made them mainly as a way for me to deal with the frustration of a kitten in a tree going MEW MEW MEEEWWWWW MEW MEEWWWWWWWW!!!!!!! MEWWWW!!!! MEWWW!! and me liking animals. Some of the videos are shorter.  Anyway, back to this blog entry.

Here are some pictures from the 17th, including the garden-ish patch up near the driveway.  Some of the plants from last year did come back… I’m not sure what the thing that looks like a chive, a cosmo, and a bachelor’s button had a purple baby, but they’re pretty.  There are also some wild flowers in there, and I’m pretty sure they are some sort of Daisy Flea Bane (the kind that flowers in the spring?  There’s at least two, and one flowers early, one late in the season).  And there’s two of the perennials we planted last year after rescuing them from the clearance rack.  I took a picture of the label so you could see what they are.  They’re a kind of Veronica.  I planned that they would have smaller stuff in front of them, or I thought they’d get taller, but well… the wildflowers seem to have been a bit faster at getting taller.  I’m planning on cutting the wildflowers when they stop flowering to clear up the view of the other flowers, but for now, bees and butterflies etc. can have them for a meal.  There’s also a picture of a contented cattle dog, Kyle… after his 6 mile jog.  Folks, if you want to make a dog happy, give it some proper exercise!  Also, Ryan, don’t worry, some of your strawberries in the barrels are coming back, and I missed it earlier, but there was actually a red one on it, but I forgot about it ’cause I saw it one morning on the way to the car to go to work but I didn’t remember when I got home and then …well, yah I forgotted.  Forgot.  Sorry.  I’ll try to remember to look for more. 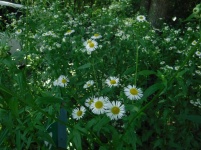 This is the incessant call of the (I’m pretty sure) Red-eyed Vireo… it’s one of those birds you hardly ever see but hear it A LOT.  This is a 38 second video.  I didn’t count how many times he actually sang, but he wasn’t exactly quiet. I know I’m aiming the camera at him somewhere in there, because I saw him fly in there… and fly out of there just after I pushed stop.  But spotting him? …Good luck, I haven’t.

Here are some more pictures from the 17th.  I managed to get some more wood moved into the yard and onto the pile, I know it’s not a lot bigger than the last time but it is, and I am pretty sure I cleared the piles indicated by that flagging tape on the tree, so I got to collect another trophy (as I clear the piles from a flagging tape marker, I take the marker to remind myself I am making progress, although I’ve left a few out there because there are other downed trees near them to go back to). Oh yah, and some more pictures of another spider.

That spider was large enough I spotted it from inside the house….and HOORAY it was OUTSIDE.

And just a few from today, the 18th.  The hazel shrub near the coop had more of the baby nuts on it earlier I thought, but today when I wanted to take pictures there were only one or two left.  Here’s a picture of one of the clusters.  And then a picture of the cluster of elderberry in the backyard.  I suspect the rain and wind got to it, too. 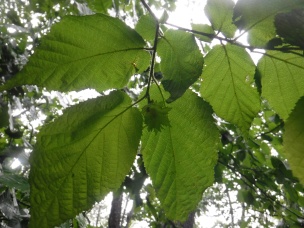 Well, that’s all for today (except I’m going to try to upload the cat videos and pictures now).