Here we go, managed to get an update relatively quick compared to many in the past.

June 24. Hooray, the food dish wasn’t tipped, always a triumph.  It’s the little things in life. The temperature has been a bit closer to the 70’s and I’ve been a lot happier with that! I’ve included pictures of Mac N Cheese, Gizmo (both roosters, Mac is black n white), and Pebble, one of the hens from Pixies first hatch. 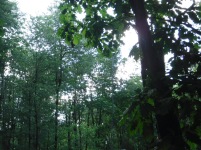 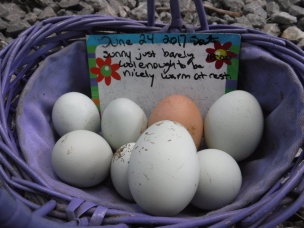 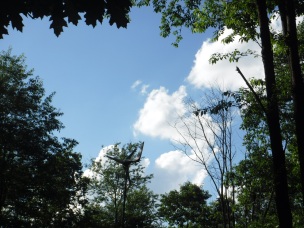 June 25. The weather was changing from sunny to ominous cloudy and back and forth, so I’ve got some sunny and some cloudy pictures.  Also, I found a patch of feathers, which for a fraction of a second, had me going really scared, but after I looked a bit closer, they looked to be from a rooster, the fluffy long feathers, like on their necks or just above the tail.  So, I double checked all roosters looked ok, and then checked the hens.  Everyone looked ok.  And I took pictures so I wouldn’t doubt myself later.  So, every chicken should appear at least once in the following… every chicken should be in at least one pi… ok, I’m having trouble phrasing this specifically.  In the following pictures, you should be able to spot each chicken at least once, somewhere.  I think that’s what I mean to say. And if I did it correctly, they should even be labeled, although you might need to hover your mouse over them? 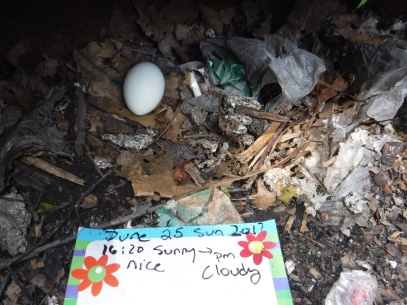 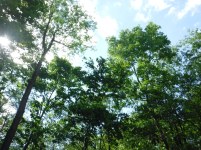 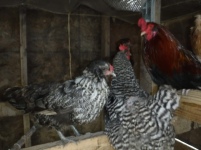 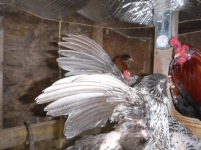 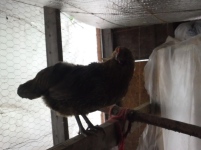 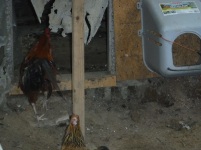 Sunny Side and Gizmo

June 26. It started sunny and cooler than lately in the morning, so I thought it was perfect.  Jogging was soooo beautiful! And here are the eggs pictures, it started clouding up this late afternoon, and it’s predicted to have isolated scattered possibly thunder storms.  We’ve just gotten clouds so far. 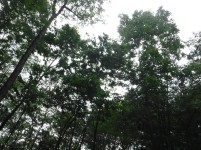 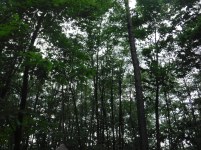 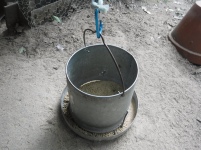 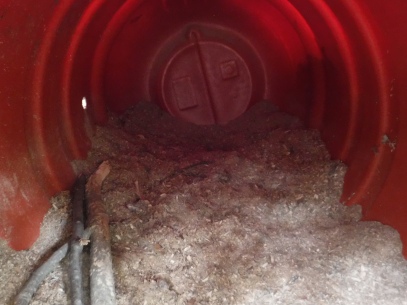 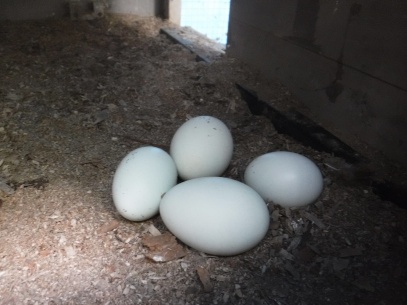 Good news, bad news.  Bad news first:  As you can see, Fearless is suddenly looking a bit over-tired and dopey.  I’m hoping she perks back up over night…but I have one of those horrible feelings…I might have to cull her if she gets bad (fingers crossed a LOT for Fearless, she’s one of my favorites…she’s such a trooper.  She’s the bird that ran under my leg as I was backing out of the first large coop by the house and I nearly fell and because I couldn’t manage to not step on some of her, I think it broke one of her leg bones, but she was put in isolation in the little coop (back when it was down by the house and a lot more protected) for a week or so, and she just kinda rested, and it got better (it wasn’t exposed, just really swollen and I heard a snap–not a pleasant experience for either of us), and she had something odd happen with her toe where it looked like a huge boil, then it looked like a thumbnail sized stone coming out of it, and then a few days later it looked normal again-what that was I don’t know!, and even when we first got her, she was the one that kinda got sent out to see what something was… I think she’s low on the pecking order so she’s somewhere between expendable and willing to take more risks to get a first good taste of something…anyway, I’m really fond of her). I’d like to put her in isolation, so nobody picks on her and she can have her own mushy food bowl…but the little coop is now up in racoon land, and I just don’t trust that a determined coon can’t scrabble through the bottom of the nesting box area of that coop… the wood turned out to be soooo cheap and flimsy.  So, if I have a vulnerable chicken in a coop where a raiding coon is known to frequent… I’m not sure that’s an improvement for her or the flock… I don’t want the coon to get any more chickens than he may already have. (Frosty Flakes and Noodles have both just not turned up for toes on perch this spring/summer, and I don’t know if it’s a fox I haven’t seen, or a coon…or something else but I have seen the coon).  So,fingers crossed.

EDIT: Went out to do Toes on Perch and pestered Fearless some more.  I had looked at her a bit for Egg-A-Day and she seemed a bit droopy, but I hadn’t looked every square inch of her over…which was a mistake (not that it would have helped much to be an hour earlier) and discovered on the side I hadn’t gotten the best look at…basically the angle of her tail had disguised in the shadow in the coop, she’s got some form of wound to her hip/rump. I’m not sure what did it, but it’s deep and the flies and other crawlies wasted no time in setting up shop… I’m pretty sure I’m not going to be able to nurse her back to health, I think I can see bone in places. I don’t know how far under the skin any dirt/debris/parasite has gotten…I don’t think she will recover….she will just get more and more infected/affected by it. I’m not letting this go like Nutters, hoping she would get better, I am going to end it quickly. Tonight.  Sorry folks, and I’m super sad.  I don’t want to accept it, but I’m going to have to do it, or let her quite likely die slowly and unpleasantly.  I’ll go look one more time at her, and if I change my mind I’ll let you know in a second edit right after this, but don’t hold your breath, and if it doesn’t appear in about an hour…it won’t.  Fearless, I’m going to miss you. 2nd edit: It’s done, very quick, very clean.  Essentially no fuss, no stress, she was definitely not going to get better…and this was more merciful. Fearless, I’ll keep you in my heart.

Wow, that was a long one of the bad news.  Ok, good news is really really short, and not exactly what I’d like to be saying about the kitten but here we go: I put a picture in with the chickens and eggs of the Kitten… Yah! Jezza is soooo cute.  And, he’s looking for a home.  The first shelter I contacted about him was not accepting any cats/kittens as it was full, and the second one which I think is basically de-centralized and made entirely up of foster homes said they would ask around and see if anyone could foster him.  And I haven’t heard back, but saw one of those booths in front of a big store when I was coming out with them and a couple big cages/crates of kittens looking cute while looking for forever homes. And I said they needed to get them all adopted so they could then help get Jezza adopted, and the one person said they need to get them all adopted because on lady there has 40 (that is FORTY) kittens she is fostering AT THAT MOMENT in her house, one other one had 5 or 7, and another had 2.  It’s definitely KITTEN SEASON. And so, I’d just like to rant a bit: PEOPLE SPAY OR NEUTER YOUR PETS. DO NOT DUMP THEM. IF YOU HAVE TO, WORK WITH A SHELTER OR RESCUE ORGANIZATION. Cats can have so many kids so quickly! GET THEM ALTERED!!!  Oh yah, good news is, if you want a kitten, you are spoiled for choice, but consider, Jezza, he’s so adorable.

2 thoughts on “Egg-A-Day June 24-26. Edited/updated with bad news about Fearless.”