Spoiler alert: I’m pretty sure I don’t have any terrible news in this post! Hooray!

Here are a few of my favorite pictures. 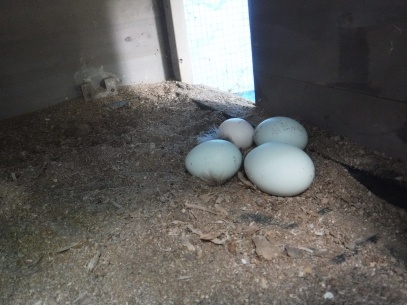 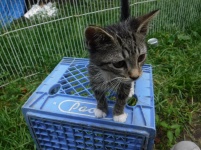 Knowing I was going to be gone during peak coon activity hours, I tried to do a pre-evening Egg-A-Day before I left, then planned to do a late sweep to see what happened later in the night.  As you can see, I interrupted a few of the ladies in the little coop, managed to gather (after all that flapping and chicken hysteria 1 egg, and spotted Mac-N-Cheese out in the woods. So, in the afternoon I gathered 2 eggs, one from the little coop and one from the back that Lacey laid.  When I got back, there were at least 2 eggs in the little coop cracked open and eaten like little Easter chocolate eggs with the wrappers left on the floor for mommy to clean up.

June 29. I decided to try making hot sauce eggs… which was a pain as I was using a small syringe to suck up the hot sauce poured out onto a small plate.  I have some syringes I keep specially for crafts/projects like this (you can get them from places like Tractor Supply), and I didn’t want to put the needle right into the bottle for several reasons… one being while I clean the needles and syringes (the syringe is the plunger and tube part, the needle is the needle) between projects, it’s not like I can be sure I’d like to eat off the cleaned result… I think I would but I’m not super sure, so instead of contaminating the bottle by sticking it in the bottle, I poured out the sauce and sucked it up from the little puddle.  Also sticking the whole needle and syringe into the bottle means it gets all sorts of EW HOT SAUCE on it…. and if I had to burp out bubbles or whatever it would go back into the bottle…which is again, not something I want to do. And it was a good thing I did it this way, because it turns out both hot sauces I tried had little bitty chunks of vegetable in them.  Like really tiny, but when the hole in the syringe is REAAAALLLLLYYYY tiny, stuff plugs it up easily. So I had to squirt out to push it out of the tip, and then suck up a bit more fluid and try to avoid the chunks and then squirt out more… anyway.  This took a long time to even get like 5 ml.  I made 2 eggs this way.  I tried puncturing the shell directly with the needle, but it seemed like it would either shatter or skitter sideways, so I used a drill bit for making really large holes (because it has a tiny pointy bit sticking out to sort of carve a pre-hole before the main paddle part of the drill bit gets there).

By sort of hand-twisting it back and forth, I was able to make a tiny hole in the shell, then squirt in the sauce (which meant pushing a bit of egg out because these eggs are really fresh, which means there hasn’t been a lot of time for the egg to lose water and have air gradually seep in through the shell and membranes and this meant a bit more mess). And so, before I left for work in the afternoon, I brought out the 2 eggs to place in the little coop and olive barrel on my way to the car. Unfortunately, when I was putting the egg in for the little coop, one of the blond little ladies (not Pixie) freaked out, pecked it, knocked it just a bit out of my hand (my other hand being full of purse etc. that was enough for it to fall and go splat… so that one was a bust (haha).  Luckily I had already placed the olive barrel’s egg.  I didn’t use Ryan’s coveted Flash Bang seriously dangerous as in people go to the hospital sauce, because that’s special stuff but I was hoping the “hot” hot sauce in the shelves would work.

So, here is what I found in the evening when I got a chance to get the egg gathering done.

And here is June 30.  It’s surprising to think we are already just over half-way through 2017! Wow.  Today we have a video of some of what I’ve wanted to get on video for week or more now.  Once and a while, if I’m in the right place at the right time, I hear Lacey SQUAWK her I laid an egg ruckus behind the yard, then after a while, I hear it travel up the yard.  Last time I heard it, I managed to run to the porch, to watch her noise her way up through the yard on the path from the back gate to the front gate… meanwhile Kyle has just kept sleeping or watched her do this with little to no interest… He’s usually a chicken harasser, so I thought she was going to die the first time she tried this.  And I have to say, to do this, she flies up from the ground to the barrel where she lays her egg, and either back to the ground after laying the egg, or maybe directly to the top of the back gate, then INTO the yard, and then reaches the top gate and has to hop up and over that one too…so Kyle usually doesn’t have to use much restraint to not harass the chickens….they’re supposed to be outside the fence.

So as we can see, the hot sauce egg got eaten like any other egg… I might have to use a hotter hot sauce if I try this again.  I know last year we tried it and found the egg half munched and thrown down outside the coop as if it had been hastily put down and spat out with a raccoonian curse word or two.  I think we used the flash bang stuff though.  And we can also see that Blondie (I don’t think that’s Sunny Side) didn’t care, and just walked over the shell to go lay in the back of the olive barrel.

But here is the long awaited video of Lacey…

And here is July 1. As y’all might have noticed, we still have Jezza Kitty, who NEEDS A HOME… he’s such a love bug, and I really wish he could fine a furever home right away so he could cuddle the purr out of he new family.  And speaking of purr, he purrs like a champ!

Well, that’s it for this Egg-A-Day update.  Thanks for visiting!