While I was hiking the Appalachian trail I met LOTS of people who LOVED gummies. Most hiked with Gummy Bears. I, too, delved into the Gummy Bear adoption scheme. Low and behold though I never could of imagined what was going to happen.

See Gummy Bears look nice and tasty and seem like well behaved gummies in the beginning. BUT the longer you go hiking in the woods with them the faster they return to their natural state of being.

Gummy bears are naturally wild creatures. They only seem tame. I learn the hard way as did many other hikers.

Once Gummy Bears discover they have been returned to the wild they turn into crazed party bears. All they want to do is drink beer and throw wild parties. They stop following the rules and tend to make a huge mess of your backpack and other stuff and NEVER clean up after themselves. No matter how hard you try to negotiate with them they just go on and on and act as if they are being suppressed and give you guilt trips.

So eventually I have to ditch them by the time I reached the Georgia/North Carolina border. I thought I was finally free but then about a week later I heard on the news that a train was hi-jacked. As it turns out it was the GUMMY BEARS! They stole a train and were after me!

The Gummy Bears didn’t come straight for me though because they were always stopping to get more party supplies etc… So they were moving relatively slowly. However, when I arrived in Northern Virginia they caught up with the town I was in. Luckily some Swedish Fish were in town and they warned me before it was to late.

This brings me to the Swedish Fish.

I learned that the best gummy to hike with were Swedish Fish because they swam in schools which means they were educated and more mature. Meaning not so easily persuaded to do stupid things and get into trouble. They were more helpful than those crazy Gummy Bears ever were and they didn’t make a mess either. 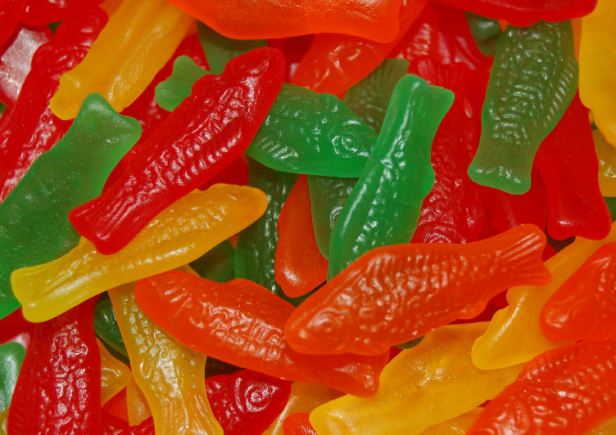 So thanks to them I got out of there before the Gummy Bears got me. Gummy Bears are hard to get rid of because they imprint on there original owners. And they will stop at NOTHING to rejoin them! BEWARE!

Anyhow all was well for awhile…

Then one day we came across Sour Patch Kids. They seemed fun at first. They didn’t misbehave to much and if they did then you just ground them from their X-Box. Typical teenage angst thing going on there. Bad thing is they were easily manipulated and many were able to be bought.

The Sour Patch Kids informed the gummy bears that the Swedish Fish loved to eat Gummy Worms. The Gummy Bears quickly went into brain storming mode on how they could use this to their advantage. Needless to say this took a while due to Gummy Bears are not to bright.

How did they do this you might ask? Well the Gummy Bears manage to figure out that Swedish Fish can’t hold their liquor. They also learned that the smell of tequila was enticing to the fish. So the Gummy Bears would get the Gummy Worms drunk on tequila and go fishing.

After the Swedish Fish were rufied by the tequila worms they transformed into Swedicans (Swedish Fish + Mexican tequila). And due to the mind altering tequila, the Swedicans were easily captured and interrogated.

So now the war has escalated to chemical warfare. Swedish Fish everywhere were on the run. Not to mention me!

Luckily for me the further north I hiked the less the Gummy Bears could keep up with supply and demand essentials. They were not to good at resource management. Many Gummy Bears would be captured due to getting plastered on the tequila themselves. The Swedish Fish were able to get informational packets out to their community on how to avoid these strange Gummy Worm encounters also. The Swedish Fish opened a Veteran Affairs Hospital to treat the Swedish Fish injured in battle and/or once POW’s as well.

So once I completed my hike I thought I was free and clear of these crazy Gummy Bears. Low and behold I was SOOOOOOO wrong!

Today in the mail I received this ransom notice…