Ok, here are the pictures and videos from Trail Days…here we go!  This is setting up the nice but old tent we have that fits 2 dogs, our stuff, and ourselves.  We get a spot in the somewhat middle of the field, with plenty of open area around us, where people can set up their smaller tents.  Plenty of room for everyone yet to come!

Here are some pictures of us wandering around the vendor area and stuff like that.  Doc get a snow cone thingy…and when I decide to get a picture of him eating something so yummy and fun… well, first picture he either wasn’t ready, or was missing the point of …fun.  And here I am sporting a name tag from Granite Gear, which really gives you the idea of what I heard just about every conversation start with “Heeeyyy, it’s (insert trail name)”  “Heeey, Doc!”  “This is my wife…”

Okay, yah, I look pretty derpy in the picture where I’m trying to get my trail name sticker… I’m not great at aiming a camera at myself and pushing the button.  And just for later reference, note the shirt and skin I’m wearing.  It was really hot for me… and I meant to find sun screen somewhere.  I didn’t get a chance to pack the stuff I had at home, which is old… and I figured I’d find some somewhere when I got there…also only meant that to be a sleep shirt but it got really really warm and humid.  Aaannnyway, on to the next set of stuff.  Here are some videos and pictures of after dark on Friday night…it’s pretty hot too, in a way.  Here is a bit of the drum circle from a distance.  Remember, we’ve got the dogs with us for everything we’re doing, and with respect to them (and, hey it’s not really my thing either), we kinda kept back from that crowd.  Another reason to stay back (and respect the dogs) are the other dogs… just about everyone who had dogs there had them under control and behaving well, and kept an eye on them.  However, there’s always one or two dogs out there who have people who forget to keep an eye on them… and in those crowded settings, in the dark… it’s asking for trouble.  Whatever, we found something to keep us occupied a little ways from the drum circle.

Okay, you out there who were thinking of other things, THIS is what I was talking about. 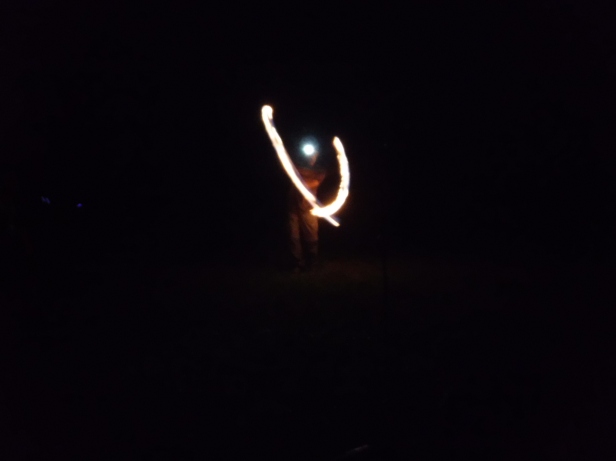 And here are some videos of this.

I’m really glad these videos came out so well.  I’m not sure Ryan’s had a chance to see himself in action.  The last time he had a chance to try this, my camera didn’t do nearly so well, and it’s probably pretty hard to do this in front of a mirror!  It looks like a serious work out (that staff is not exactly light) physically and mentally (steering, aiming, balancing, planning where to next send it… ), and we’d already had a long day.  Well done Ryan!  He did another try afterwards, but my camera battery was toast.  I’d apparently made 2 videos about 20 minutes long each, at least, of the inside of the camera case…. when I thought I turned it off, but hit video instead… good news is, even inside the case the audio came out pretty well… bad news is…it’s pretty boring, so I’m not posting them.

Next up are some pictures from the next day, including one of my totally favoritest ice cream trucks, and some views of the hiker parade.  I spotted at least 3 drones taking pictures, so someone out there got some pretty interesting footage, I hope…and I hope the torrential downpour which started a few minutes into the parade didn’t totally trash the drones.  It definitely gave just about everyone there free showers, whether they wanted them or not (… and those who didn’t get them dove for cover quickly and early). That wasn’t the advertised free showers, there were at least 2 groups there providing way cool free shower facilities to hikers.  I gotta say thanks to everyone (groups and individuals) who comes to Trail Days and makes it awesome.  In particular, simply because we experienced the awesomeness ourselves, Granite Gear and another group (something about a flying pig) does a really cool thing where they repair/replace/fix as they can gear.  Ryan’s waist belt and shoulder strapping set got some needed attention–Thanks again, to the company and the people who come out, you’re really helping make the world a better place!

There are also some pictures there of the after-deluge.  We struck our tent because it had some serious water issues.  Due to age, we had some very minor drips coming in, which we could have worked around, but the sheer quantity of water coming down caused the field to get pretty soggy, and water was coming up/in that way, as well as someone displayed some serious poor etiquette and set their canopy up literally over the back corner of our tent (without consulting us) in such a way that it splattered water onto/under the rain fly and into our tent… which kinda got it pretty wet inside.  We were debating heading out early and sleeping in the parking lot of our drop off point, but decided to sleep in the lot here, then  head out early.  Of course, after the deluge came the sun which was nice to dry things…but it was also pretty hot and humid again… although me in my pink parboiled looking sunburn (see later pictures in a different blog entry) skin was wearing a t-shirt.  You know you’re burnt badly when areas of skin which are regularly exposed to sunshine often are pink and tender…and you feel like you glow in the dark and even just existing stings… well I’m a derp and know better.

Here’s one of my favorite pictures… in a way.  It’s from later in the weekend but is relevant to Saturday night, as that’s when we found this AWESOME pizza place, Steph and Andy’s Pizza Plus.  I am not a food buff or pizza connoisseur, but I do have definite likes and dislikes about pizza.  I don’t like thin crust, too much sauce, or a lack of cheese (unless it’s a pizza with some sort of other theme… you might squeak by without so much cheese). Steph and Andy’s Pizza Plus has my approval.  We didn’t get to try the buffet, to try out a bunch of varieties, both Ryan’s pizza with his preferred toppings (pepperoni and peppers or something like that… I’m not a fan of the peppers), and my cheese were great.  They were affordable, and the pizza you get for the price you pay was well worth it! I loved the crust taste and texture, the sauce-crust-topping ratio was spot on… and you get the idea.  I figured I’d post the picture of their box so anyone in the Damascus area looking for pizza that I like will know I like them… the wait staff was nice, the inside decorations and atmosphere were nice, and overall I’m pretty sure you’re not going to have a bad time there unless you try. 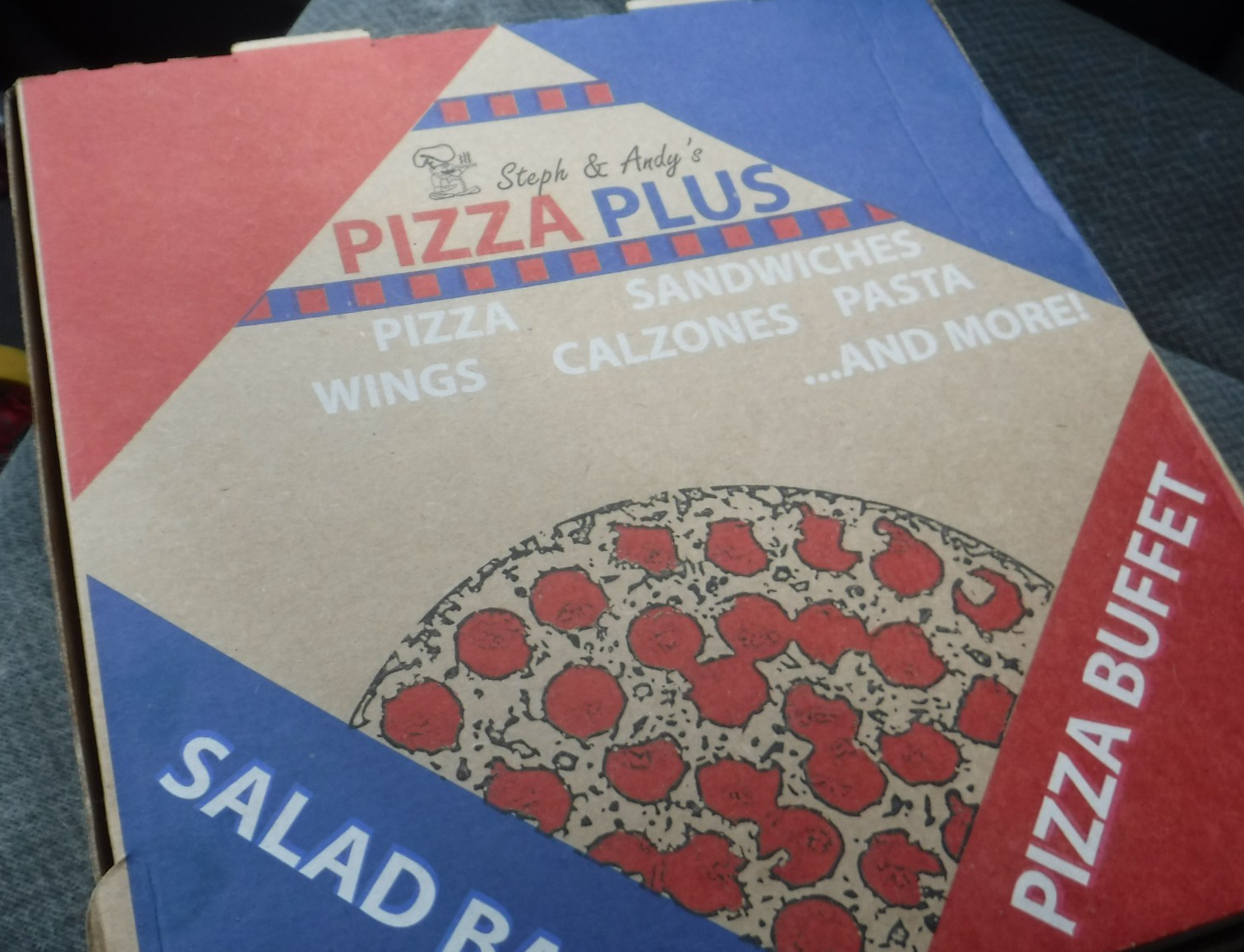 Here come some pictures from Sunday morning, at Trail Days.  Um… admission of guilt:  about 28 miles from the pick-up point for Ryan and the others we ferried to Trail Days…. I um… well it was dark… and this … really big… racoon ran onto the road out of the fog and dark… and I’m hitting my brakes and he’s running at the van… and I’m hitting my brakes… and THUMPATHUMPATHUMPA… good news is, van seems ok, and from the number of thumps and progression under the van… well I’m pretty sure the racoon went right away and wasn’t laying twitching on the side of the road.  Turns out when I got the chance to look at the van, the plastic part of the bumper took a bit of a beating too.  Goody, a souvenir! I had a chance to glimpse some racoon special forces and their associates discussing the incident, and they seem to think it was just poor timing, and poor street crossing skills.

There are some blurry pictures from inside the shelter, and some pictures of a Cat Bird (Catbird?) hunting stuff on the wall outside.  I also tried to get a few pictures of the trail, and the blaze on it.

I have to say that was a pretty big snail!  Those dangly thingies are for hanging packs and stuff, and have baffles to keep critters from sneaking successfully down the rope and raiding the dangling items…if I understand them correctly.  On the drive home, the dogs definitely did a lot of relaxing.  We stopped at a scenic overlook and Kyle said he was ready for more adventure, especially if it meant going back to see Ryan some more.  Ralf said I WANT BACK IN THE CAR TO REST because we WALKED A WHOLE LOT at that festival… but we can go hang out with Ryan if we can rest too. The weather was varied between clouds, rain, and some spotty sun.  However, of course when we arrived near the house (where Kyle could SMELL we were close), it started to pour…