Here is the SHORT VERSION (without videos) of this update, there is a longer version I just published for those people who either are really patient or have better internet options, and are willing to deal with the data size for videos.

And on to the walk!

So, I did this yesterday, too, but didn’t think to grab the camera until I was outside, and then decided it might be a bad idea to get pictures or video because if Ryan saw Jezza going on a walk, he might decide he needed a trail kitten…but then the trail kitten would end up coming home… and we would have 5 cats in a very small house… along with me, and Ryan…and 2 larger than small dogs…  We all get along, but even with just 4 cats, that’s plenty of vet costs to be going on with, and we are running out of comfortable spots for critters to chill…even cats who have some odd preferences for where they like to chill.

Anyway, today I took the dogs for a quick walk after I got home from work.  And I took Jezza!! Wooo-hoo!  He wore a cat collar (break-away in case he got loose and then got stuck, he wouldn’t strangle or hang so easily from the collar), and also a kitten harness, which on it’s smallest setting actually is barely small enough for him. And that was connected to a cord about 8 feet long, and that was connected to (but not shown in the pictures because I forgot to take it out of the little section of the pouch) to a small zip-style extenda leash thing. And there’s the black pouch thing, which was not designed to hold kittens (or even 1 kitten), it’s been hanging around the house being used for various things on rare occasion, and it originally came with Ryan’s white water kayaking helmet.  It has a strap which fits nicely over my neck and one shoulder, and it has a zipper opening to the main large portion of the pouch, where the kitten goes in (bottom first) and his cute little head sticks out through the partially closed zipper area.

Anyway, here are the pictures and (but no video)!

There are two videos missing here, basically saying how well Jezza is doing.  He does really seem to enjoy just hanging out in the pouch, with his head poking out, and checking out all the stuff we are walking past. He likes to be held, he likes to be with people, and likes to be close and cuddled, so being in the pouch seems to be nothing too demanding of his patience.  And he even chills about the dogs, which is good, because one of the things that will set off the deeply burried “CHASE IT NOW” or “SMACK AND GRAB” instincts in  many dogs is a cat which decides to either hiss, yowl, spit, swat at, and/or streak away from an investigating dog, even if the dog was calm before the cat reacted… Jezza doesn’t care, even though Ralf could easily put most of Jezza in his mouth (not that Ralf would).  Jezza seems interested in meeting both cats and dogs, luckily ours seem to range from “whatever” to “YOU! I don’t like you! Get out of my house while I growl at you and avoid you” (The last one is Nim…she used to be the ‘baby’ in the house… and now there’s a KITTEN!!!!! and I am paying it an awful lot of attention right now…which she doesn’t realize is because it just needs to learn more things now than she does).

And some more pictures. I’m so glad he decided to look up at that moment, he had been looking sideways until I hit the button. 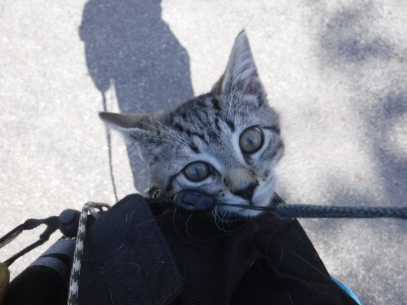 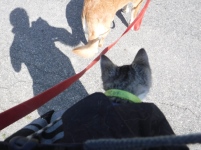 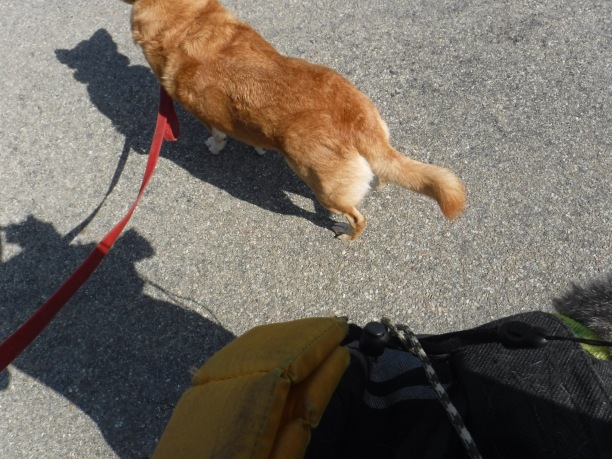 You can see my shadow has an extra head today!

Removed a few more videos of us just moving along, with Jezza still in the pouch.  Go Jezza.  Ralf even comes over and ignore/sniffs Jezza like “whatever, I know you have a kitten thing, but I’d rather go walk over here!”

And the last few pictures from that adventure!

Thanks for stopping in!  Who says you can’t get dogs and cats to get along? And who says only joeys ride in pouches!! GoooooOOOOOOOO! Jezza!!!  Jezza NEEDS a home!  And a mommy or daddy or both, and maybe even kiddos who are good at not stepping on small crushable toes.  He likes to pounce on things, and chase thingies that drag and slither.