We added a few more birds to Dad’s list today, which we hoped we would, but didn’t really expect to. We added Roseate Spoonbill, and a few others, but the Spoonbill is the pleasant surprise.  It was warmer than the last few days, and the predicted rain held off so far, so I’m a tad sunburned. 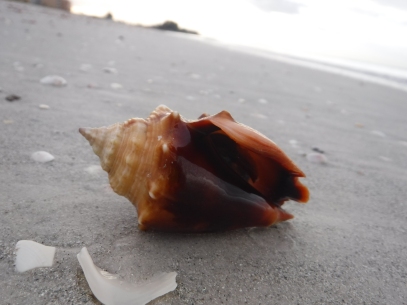 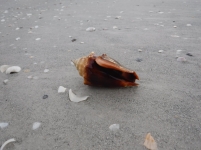 The shell had something in it, I thought it was a hermit crab, but after I rinsed the crushed shell debris and sand from the waves and tide pushing it around the surf line, I decided it had a snail in there.  I could sort of see it retract it’s foot as far back in as it was able to shrink, and it seems to have a sort of … not a claw, but well… a claw like thingy that was kind of like fingernail/crab carapace like texture from what it looked like.  I didn’t poke at it.  I put it in the water, but it wasn’t deep enough and there was too much wave action, so I moved it deeper later (and got my rolled up pants legs wet, apparently above the calf wasn’t high enough this morning).  It was alive, because it has relaxed a bit after the first attempt at putting it back in the water, and the foot part had come down a bit, and it had extended what I think are tubes for water intake/output (siphons?).  Anyway, I put it out farther, and hoped.  I didn’t see it back up on the sand in the evening when I walked, but someone else might have collected it.  I just have to hope, and be content with I tried.

We saw some smaller alligators and the Spoonbill in a park later in the day, then went to another park and saw otters in a pond.  I was SUPER SUPER SUPER excited.  They’re one of my favorites, along with wolves and dolphins and well, most mammals… moose…

And before I show you the otters, I’ll show you the pictures from the earlier in the day park, where there was a better look at a raccoon.  We took a guided tour on a 6 seat golf cart thing (3 rows of 2 wide, like a stretch golf cart), so it wasn’t like the coon walked up to us, it just happened to pop out of the undergrowth a bit early and I spotted it as we carted by, and the tour guide driver guy stopped the cart so I could take pictures (from in the cart).  He did a great job with the tour, he was able to help us ID a few birds, as well as show us interesting things.  Like Bald Cypress knees! 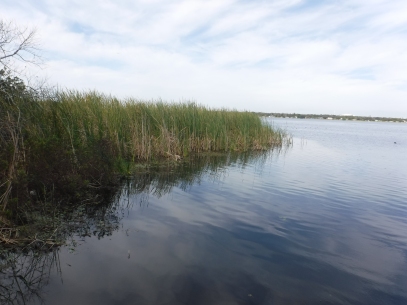 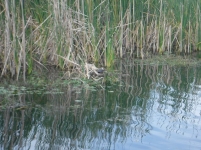 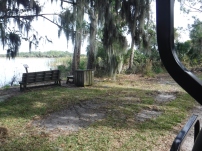 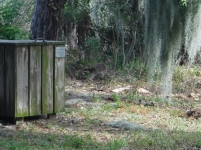 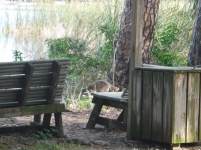 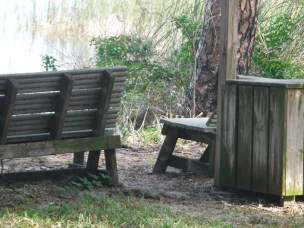 But I thought it was rather ironic/funny that I did a three month internship at Seney National Wildlife Reserve after college, and they have otters there.  Did I see them, although I kept my eyes ready and looking as often as I could?  Nope.

Then we come to Florida, and I’m looking for alligators or dolphins or birds, and we got to a little park on the way back from the larger park with more trails and habitats and stuff, and while we were parking the grounds keeper guy goes past.  Dad chatted with him a few minutes while Mom and I got out, and I got my gear ready (bird book, binoculars, camera, arranged in little backpack worn backwards so I’m like a kangaroo).  And I heard someone say “Otters” … and so it turns out the groundskeeper guy had seen them recently in a little pond about 100 yards away, max.  So we checked out a few trails and headed to the pond (which I had kind of thought would be on the trail or I suspect we would have headed there first).  And viola, otters!  (is that viola like the instrument?  does Viola have a dashy thing over a letter?  whatever!).  We also spotted a new bird for Dad’s list, a Green Heron.  This whole trip, things have been looking smaller than the listed size in the books, I’m thinking that might be actually the truth, because one of the places we stopped, someone said their eagles down here are smaller than the northern ones of the same species.  It rings a faint bell from college, too. 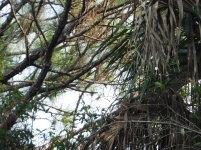 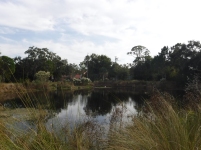 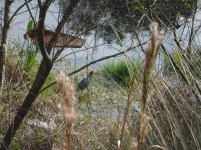 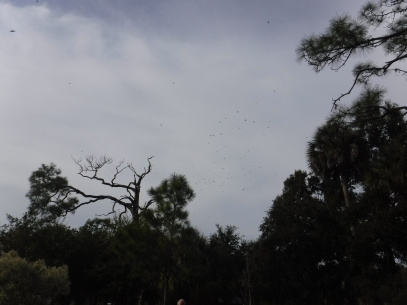 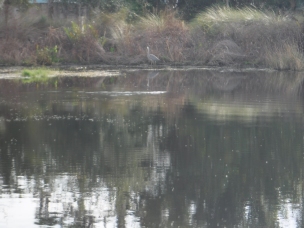 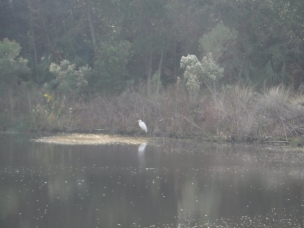 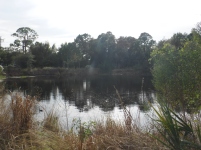 I keep feeling like I’m forgetting to mention something, but I guess it’s not life-or-death as far as the ‘forgot something feeling-o-mometer’ is registering, so I’m not going to get worked up over it.  Here’s the last pictures for today, Mom, Dad, and I got in the ocean again.  I didn’t go under this time like last Saturday, but since it had warmed up today as well as the breeze had died down, it was a great chance to dip in the ocean. 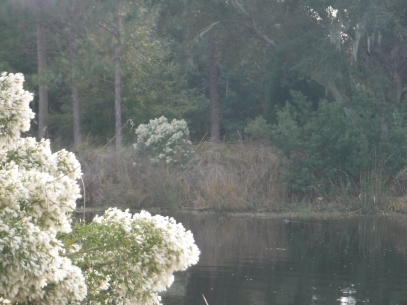 And think that’s it for this post, thanks for reading, have a great day!