Doc let Addie loose with the camera…here we go! 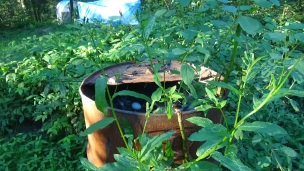 Kyle versus or and Ralf

I saw Lacey hop up into the barrel earlier today, and later saw her sitting there, panting in the sun, determined to lay in that barrel.  Kyle was pretty riled up, so I got him to play with his older “brother” Ralf, who wasn’t sure about this tug-tug game.  And Nutters did her thing today.

Checked under the metal shed

Checked under the metal shed, happily there was no cache of stashed eggs piled high, at least where I could see. Get ready for a shocker: there were no eggs in the feed/cart shed, something took the bait egg a few days ago, and nobody used that location today.  And if the door isn’t completely closed, always expect to have a chicken on it when you enter the coop–at least it’s not a bucket of white wash! 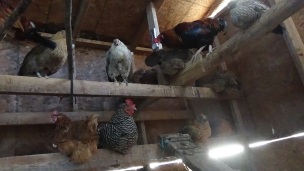 Not-Mac-N-Cheese standing up, Oregano giving me the eye ball treatment, and Gizmo, who seems to be molting as many of the others hatched last year are doing so too.  It’s hard to see but he is missing the long curved tail feathers. 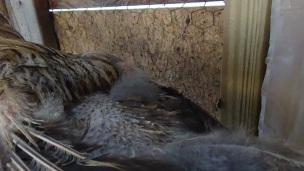 Lacey, one of last year’s babies is trying to grow in new feathers (the grey tubes around a dark shaft).  Dire and Pixie are on the same perch, and I thought the size contrast interesting.  Pixie incubated (but did not lay) Dire’s egg last year. Speaking of eggs, no eggs in the coop today, or the run. 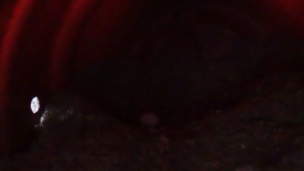 A lot of gals laid in the little coop today, someone liked the idea of me crawling into the sawdust filled olive barrel…so she laid there.  This is the full basket for today, 9 eggs, including a Nutters and a Pixie egg.