Pre-note: Sorry folks, for most of this, I didn’t have time or interest in taking pictures…I just spread out the ones I do have over the whole story.

So the days following dropping Doc off for his shake-down bike trip from Pittsburgh to D.C. were pretty busy, but mostly with stuff not having to do with any trip preparations.  We’re currently sort of fostering a mamma cat who showed up under our house, and may or may not be nursing kittens… so that’s a whole ‘nother set of stories!

This story is about a possum named (eventually) Hours, and about me (Addie), and Kyle, and a bit about Ralf, and a bit about Scout (the mamma cat) and an unnamed, unfortunate, and turns out, pretty unwise possum mom and her kiddos.

So, nutshell this story: I needed to be up early for work, I already was up after I went to bed looking for mamma kitty’s kittens which suddenly were probably out there somewhere based on her body getting ready to feed them after a few days of not starving dumped in the woods on her own, and after being fed and feeling a bit more safe after we took her in.

So I’m already stressed about a lot of things, and reaction times are not the greatest, so when I let the dogs out later in the night, and planned to spy on our mamma kitty to see if I could catch her sneaking off to feed the hypothetical kittens (…the rescue organization can take the cat and her kittens in as soon as we find the kittens…otherwise we’re watching her until she seems to have weaned them…) anyway, so the dogs went out, and I followed with a flashlight.

And there was a lot of me screaming “No” and “Drop It”, and “Leave It”‘, a lot of Kyle getting super excited, a lot of this really big possum INSIDE the fence, and then there were scared babies, and there was a playing dead mommy who wasn’t moving and got picked up and shaken a few times by Kyle so who knows what’s going on with her… 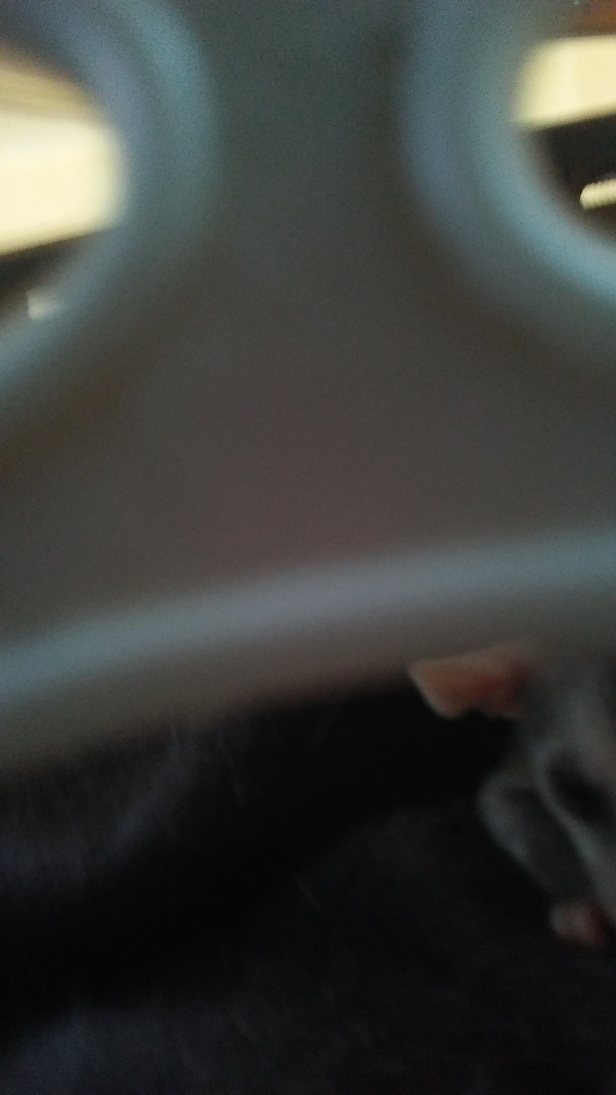 And I’m already stressed and tired, and so the fun continues with some cleaning blood off Kyle, and the relief of at least it’s not his, and a lot of saturating the area with rubbing alcohol just in case (he’s pretty darn up to date on rabies vaccines, after his extra booster last year, and apparently it’s reaaalllly unlikely for the rabies virus to set up camp in a possum).

And after that, I went outside to check on what was left in the yard…. which was about 6-7 baby possums the size of ‘teenage’ rats… making a puffing/blowing noise. That’s apparently the noise that says “help mom, I’m over here”….not whining.  And mom was gone, and there were a lot less babies than I thought I saw earlier, and no blood trail to follow, and no hiding mangled possum in any nook or cranny I could find inside or near the yard, so who knows where Mamma P. went, but I think she took some kids and hope she’s going to be ok.  I went to bed hoping to sleep a bit, and that the babies would disappear overnight, and I could tell myself they got rescued when mom, who was only a little injured came back and got them.

No luck, when headed out to work, I still heard puffing in the yard, so when I got home, I called the vet about bringing Kyle in–they’d look at him if it would make me feel better, and booster him if it made me feel better, but since it was a possum and he didn’t have any injuries I could find, they didn’t pressure me to bring him in-bonus! Not having to add that to the list. They did give me the contacts for a few wildlife rehabilitaters in the area, and on the 2nd try I found a lady about an hour away who always takes possums. 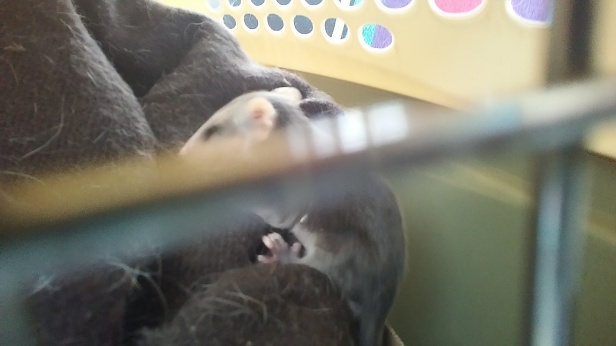 And instead of packing the rest of the stuff to go pick Ryan up and take us all to Trail Days, or spending another 2 hours on Tech Support phone lines trying to get my GPS unfrozen after an update, turns out I’m going on a road trip with the babies… I was still hearing puffing in the yard.

So I wrote down–on paper–directions (how primitive! hehe) to get to her, searched around the yard, managed to find just 1 living baby (I’m hoping that I really wasn’t hearing quite so many when I thought there were 6 or so… I know we lost a few but if I did hear that many at first, some went missing somehow).  The only way I kept from feeling like a terrible person for letting these little precious critters sit out in the rain storms for nearly a whole day was that I didn’t know the mom wouldn’t come back (rehab lady said not likely at all) and I was doing the best I could for them now.

So, 1 possum baby, and some old clothes and a cardboard box in a crate go into the car, I drive and get a bit lost, and eventually find Kritter Kamp, and meet a WONDERFUL lady.  We chatted about critters, I got to hold the baby possum, and name him.  I’d been thinking on the way over what would be a cool name, and Hours seemed good… I gave a few hours of my life, and with any luck at all, it will have given little Hours the chance to have a lot more life than he would have if I had just let him die of exposure or be cat bait in the back yard.  She let me take pictures of the possum, and I also got to meet a ‘graduate’ of hers, I think she was called Scampers.  Scampers came into the garage to say hi to the rehab lady, and had just been reintroduced to the wild, so was still checking back in on home base and getting free grub to help her step back into the wild thing successfully.  Scampers was a great name for her, cause she’s a squirrel. 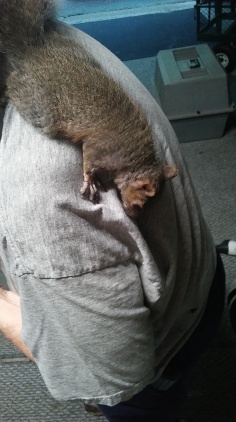 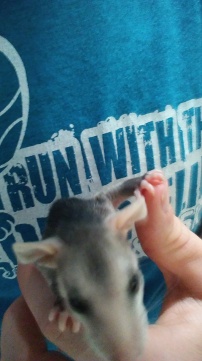 I’m posting this really late at night, so I will try to keep the next bit short too:

Wildlife Rehabilitators are amazing and valuable and kind and …. I can’t say thank you enough.  I couldn’t raise little Hours properly (or legally), and I feel very responsible for the whole horrible mess, but at least I know that he’s in very, very capable hands.  Last year she had over a hundred possums in her care, and this year she’s already got 60 right now.

Possums are cute, and if that isn’t your thing, they’re great at eating ticks which spread disease.  There are so many reasons to be kind to them.  But even if they were ugly or maybe not the most useful, it still would have made me feel horrible if I couldn’t help Hours, so THANK YOU to Kritter Kamp.

Leaving Hours in your care gave me a little bit of sanity and less-stress back into my life, and that is priceless.  And, giving Hours a chance at life is even more valuable.

Thanks for visiting this blog, be kind to the critters, y’all.

2 thoughts on “A possum named Hours”