Prologue: In typical Addie fashion, you’ll have to scroll down a bit to get to the pictures, but they’re there after the tangential introduction.

I always am scanning the birds and other flora/fauna while I jog, walk, or whatever, in case I see something novel or fun.  Last big find was turtles, but this time it was a lot harder to ID… I mean… the turtles were obviously turtles, and narrowing that down, they were pretty clearly some sort of snapping turtle, and in this area, there’s only the 1 kind, we don’t get the alligator snappers this far north as far as I could tell…soooo that narows it down pretty quickly.  Plus I could get pretty darn close to the cuties.

These birds sometimes were with other birds, sometimes on their own–they didn’t avoid the flock of sparrows (I think some kind of sparrow, but they didn’t turn out so well on picture), but they didn’t follow it or stick with it either.   They had a sort of flash of yellow and black on their face occasionally, so that made me interested immediately.

I felt a lot closer to them than the camera seems to make it, which is usual, but I think I got some clear enough.  Birding is giving me an outlet right now too, it’s an excuse to stop or slow down, or walk and stalk for a little while…I say excuse, it’s more like motivation.  I’m battling Achilles tendonitis, or maybe ‘pump bump’ (even though I don’t wear high heels) which is a similar related condition… Suffice to say I’ve not been taking proper care of my Achilles since, well, since Ryan got back from the AT, especially the left one.  I’ve had various amounts of stiffness, pain, and a lump on the left lateral posterior heel, on the clacaneus (heel bone) area.  And I’m too stubborn and trot-crazy to stop jogging fully to let it heal.  I can’t bring myself to stop jogging for months, and to stay off my feet (not going to work for my job either, no matter where we live)–anyway, I think it’s not just an overuse thing, it’s also a nutritional thing, and I did a bit of online snooping, and I’m trying to increase my collagen and magnesium intake, we’ll see how it helps.  I’m trying to take gentler, more flat jogs, at slower speeds.

And that takes me back to the birds!

Here are some pictures.

Here’s some pictures from a quick stroll just because they’re pretty.

And a few days later, today actually, I took some pictures while out easy jogging, which included another pair of birds (as in 2, I have no clue if they’re romantically involved or anything, just 2 of them).  I thought they might be the same ones, but the more I’m looking at the pictures, I think they happen to a different 2 birds in the same area.  I hadn’t looked up the original birds (the larks, I think) before today.  Now I think I have 2 neat sets of birds, I’ve seen snow buntings before, they’re a lot easier to ID when they’re white!  But they are not an every day bird, and I’m pretty sure the Horned Larks are a life list level bird for me. (haha, I’m laughing inside, because I think there is a species of bird called ‘lark buntings’ but I didn’t see those).  You’ll have to zoom in to see these guys at all, as usual.  It should be easier to spot them, as they kindly hopped along on the paved path instead of in sandy beachy debris.  Much easier!  They have white underwings, which I saw when they finally flew off, but of course they move faster than I can aim the camera and push the button as well as it can focus so I didn’t get anything like a picture of that. 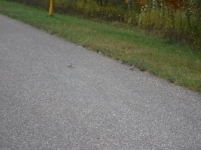 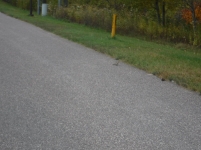 With any luck I’ll keep the interesting birds coming, as well as putting up a lot of the pretty places pictures.  Thanks for stopping in!

PS I used the Cornell Website to figure out what the birds were, here’s a link to some of the pages I used, although I followed links on individual pages to more ID info, and picture libraries to see more pictures and get better range pictures.  I also did a lot of browse by shape to see if there were options in the warbler, thrush, chick-a-dee, finch, etc. shapes.